One of Dartmoor’s Great Jewels Reopens after Six Years

Set high above the Teign Gorge on the edge of Dartmoor, Castle Drogo is recognised as a masterpiece of early 2oth Century architecture. Crafted from local granite, the castle is reminiscent of a medieval fortress, complete with battlements, entrance tower, twin turrets and portcullis. Commissioned by entrepreneur Julius Drewe and designed by famous architect Sir Edwin Lutyens, Drogo castle has intrigued and fascinated visitors for decades. However, the castle has recently had to undergo major repairs that have meant parts of the building and grounds have been closed to the public. After an ambitious six-year project this year sees its reopening and a return to its former glory.

A Memorable Day Out

There is no better time to visit this wonderful National Trust house and gardens. As well as a tour of the newly restored interior, there are delightful informal and formal gardens to wander – the Lutyens designed garden is colourful in all seasons.

The Estate also has miles of pathways to explore in the Teign Gorge from along the bubbling river to Wooston hillfort, high above the gorge, offering some of Dartmoor’s most stunning views. At the end of your visit you can treat yourself to a look around the shop and cup of tea in the café.

Castle Drogo is extremely dog friendly:
Teign Gorge – the estate is a dog walking haven. With over 1000 acres to explore this is the best spot for letting them stretch their legs and chase a ball.
The Grounds – With your dog on its lead, head for a wander around the castle grounds. Dogs aren’t allowed in the formal garden but they are allowed in the orchard, rhododendron garden and along Mr Drewe’s path.
The Shop – Feel free to mooch around our shop with your dog on its lead. Although the cafe doesn’t allow dogs you can grab something and sit outside under the new awning. 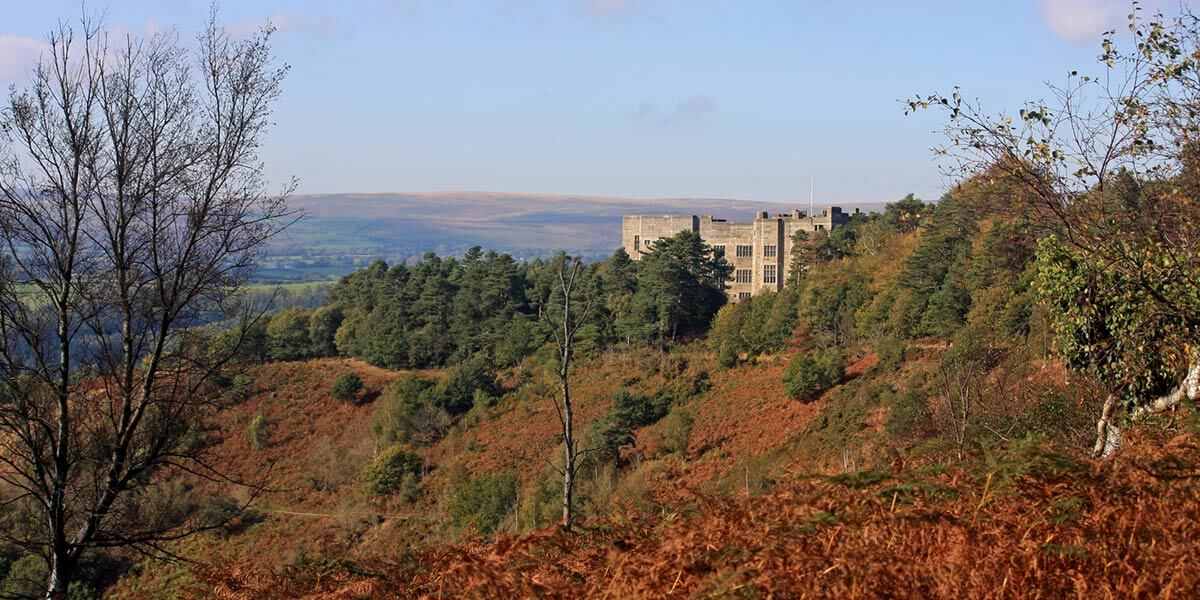 The restoration is now reaching completion and Castle Drogo will become watertight for the first time in its history. Without this work, a national treasure would have been lost forever. This has been conservation on a grand scale.

Castle Drogo’s medieval-style flat roof has been its Achilles heel. Lutyens had attempted to seal the roof using asphalt, a relatively new and untested material for the time, but before the building was even finished, it had begun to leak. The flat roof is roughly equivalent to two international football pitches, so a two-layer membrane has been created to cope with the extremes oftemperature experienced on Dartmoor. In order to lay the new waterproof system, 2,355 granite blocks weighing 680 tonnes had to be removed and then reinstated, involving moving and reassembling entire battlements and large sections of the castle walls.

The building has been completely repointed. The cracked cement pointing removed and replaced with an improved lime-based mortar. The sheer amount of new pointing required stretches to an impressive 60,000 metres (laid in a line it would stretch all the way from Castle Drogo to Lundy Island).

The windows had been another major weakness for Drogo. In keeping with a medieval fortress, Julius Drewe had demanded that there were no windowsills, a feature that would have offered some protection from the fierce elements. Every one of the 913 windows has had to be removed, refurbished and resealed.

Don’t forget
The White Hart is ideally situated for a visit to Castle Drogo and many other National Trust properties and gardens. Rooms start from £80 for a double sharing or £50 for a single. Groups are welcome with our Mews offering the perfect accommodation for families or larger groups.

BOOK NOW
Just ask! If you want to know more about Castle Drogo or other things to do please ask our staff at reception for more information.

Calling All Creatures of the Night!
30th October 2020